At EMC World this week we announced ViPR and the question that I have not stopped being asked since is, “VPLEX or ViPR?”.

The reason is due simply to the way we have messaged ViPR. Several of the ViPR Press Releases and Blogs have referred to ‘virtual storage’ and ‘pools of storage’ a concept that many people associate with storage virtualisation products such as EMC VPLEX. Further statements around ‘Control Plane’ and ‘Data Plane’ came close to messaging that we also previously used when discussing EMC Invista our previous foray into Storage Virtualisation.

So what is the deal. For me a simple sales guy, the best way I have found to think about ViPR is as a virtualisation and abstraction layer for management and orchestration operations. Think of it as a method of providing a standardised way to, amongst other things, automate provisioning across storage arrays by enabling users to choose from pools or classes of storage that could be mapped across different types of storage arrays.

But what happens if the end-user wishes to move data between classes of storage that are mapped across different physical arrays. The expectation would certainly be that the process was non-disruptive and for that you also need a storage abstraction layer such as VPLEX. Technologies like VPLEX would sit underneath the ViPR layer abstracting the underlying storage. ViPR would then communicate with VPLEX in the same way it would communicate with a physical non-virtualised storage array, via for example the RESTful API interfaces.

In fact in the new world of the Software Defined Datacenter a storage virtualisation or abstraction layer becomes a critical component of the overall datacentre stack. Again, from my point of view, a better graphical representation of ViPR would have been:- 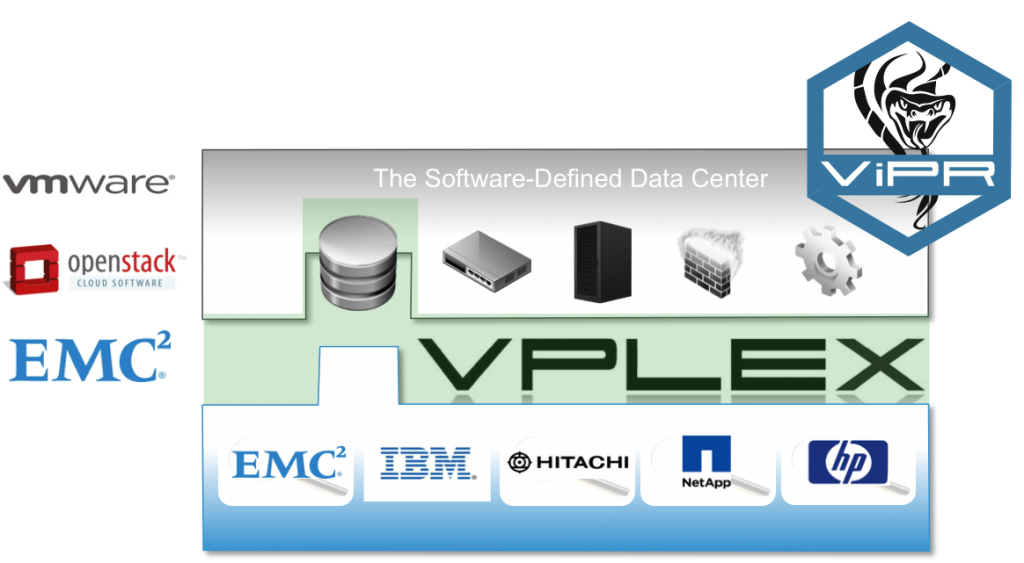 Be assured that if you have already purchased VPLEX or are planning to purchase VPLEX our recent ViPR announcement should not cause you any concern. These technologies are complementary and when used together will open up great new possibilities in regard to how we manage and automate the manually intensive datacentre operations of today. I am going off to trade mark the name ViPRPLEX™ right now. 😉

There are no responses to "VPLEX or ViPR".