Whilst there has not been a specific blog post lately there has been a lot of discussion on the Why IBM SVC and EMC VPLEX are not the same post that I originally published back in August, but until recently I have not really felt the need to tackle HDS HAM vs VPLEX Metro.

I am amazed at the traction we are getting with VPLEX and the Active/Active ‘bandwagon’ we seem to have created that all the vendors want a piece of. There are an increasing number of solutions that are claiming active/active, but you really have to understand the differences at the architecture level to fully appreciate what is really active/active.

Recently HDS re-launched their High Availability Manager (HAM) solution, more specifically how HAM can be used in  conjunction with vMSC (vSphere Metro Storage Cluster). This recent announcement has led to some confusion when comparing HDS HAM with VPLEX Metro for VMware use cases.

HAM is actually a collection of components, specifically:- 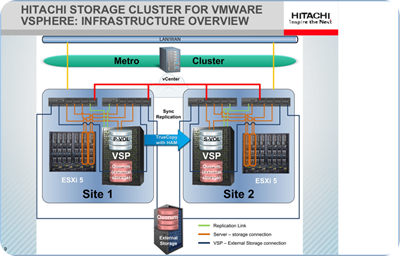 There are no real grey areas in relation to the question of active/active or active/passive; this is absolutely an active/passive solution. It uses active/passive array based replication between the VSP arrays and for the ESX host it‘s an active – hot standby deployment where HDLM automates path failover to the second site.

In a VMware environment the total list of required components, which you could argue add operational complexity, are:- 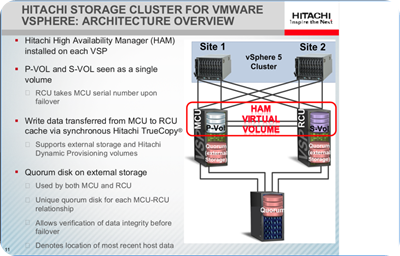 I have several concerns about the HAM architecture.

With that in mind, the key take aways are:-

As always if any of  these statements are incorrect, please comment so that they can be corrected.

There are 4 responses to "HDS HAM vs VPLEX Metro".