Why IBM SVC and EMC VPLEX are not the same.

IBM SVC was designed as a single site storage virtualisation solution that enabled less capable storage arrays to be pooled behind the virtualisation architecture and enabled with additional write caching and non-disruptive data mobility features. IBM SVC development has more recently added features such as auto-tiering and thin provisioning, transforming SVC into a storage controller type solution with embedded features (e.g. V7000), and a standalone solution that can enable storage commoditisation use cases across heterogeneous storage arrays.

The architecture is based on I/O groups of two SVC Nodes in an active/passive state, with an SVC Cluster consisting of up to four I/O Groups and eight SVC Nodes. An SVC Cluster can be configured in a ‘split node’ architecture where the two Node I/O group is split across physically separate sites using fibre channel and ISLs.

EDIT 25.10.2012: In fairness to a comment posted by IBM I have added the picture below specifically depicting an IBM Split Node SVC solution. 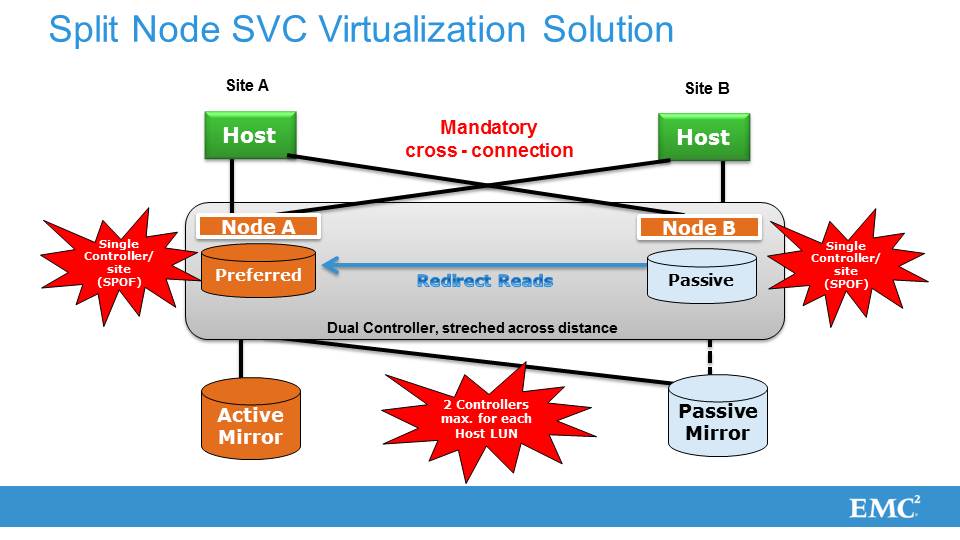 EMC’s heritage and its position in the market place has been based on the development of storage platforms and inherent software features such as thin-provisioning, snaps, clones and FAST within those platforms. EMC VPLEX was conceived as a storage virtualisation and multi-site federation solution that could be used to further augment those existing technologies and enable greater levels of both data and application, availability and mobility.

An EMC VPLEX Cluster consists of up to eight VPLEX Directors participating in a single I/O group. Each Director has four front-end and four back-end fibre channel ports with completely separate connectivity for inter-Director, inter-Engine and inter-Site communication. A completely separate, resilient VPLEX cluster can be created within a second datacentre and connected to the VPLEX Cluster within the first datacentre over either Fibre Channel or Ethernet with no requirement for merged fabrics. Once connected VPLEX enables the creation of local and distributed virtual volumes and in the case of the later, these volumes are concurrently read/write accessible across both datacentres in a true active/active architecture in which resources from both datacentres are utilised for production I/O.

Whilst VPLEX Local does not necessarily have all of the storage commoditisation features associated with IBM SVC, it does enable the key virtualisation use cases, of storage abstraction, storage pooling, data mobility and storage mirroring. For storage commoditisation use cases, EMC proposes the use of Federated Tiered Storage to enable the use of Tier 1 EMC storage software features across third-party arrays; which can then also, if required, additionally benefit from the use of VPLEX. 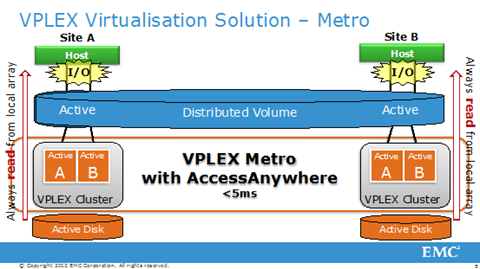 There are 24 responses to "Why IBM SVC and EMC VPLEX are not the same.".